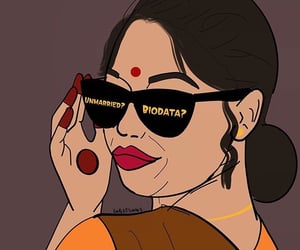 It’s like the whole community wants to be fair skinned but not actually white.

Indian aunties would rather you marry an undercover Indian drug lord who is heavily sought after over international seas then approve your marriage to a white guy from Bristol with a Chemistry degree.

If you marry the ‘Chemistry degree,’ they’ll boycott your wedding, turn you into a social pariah and wait in eager anticipation for your divorce.

That way, they can hit you with the ‘I told you so’ before deviating into India’s low divorce rates for arranged marriages.

But if you do have a family without divorce, at least one of your children will be in therapy by their late teens or early 20s.

A lot of the time we’re asked to weigh up the pros and cons between; ‘what will people think’ vs ‘the rest of our lives’ as if it’s an equal comparison.

Not that the ‘rest of our lives’ list is going to be taken into consideration, I think our parents just ask us to write it out so we think we had a choice but ultimately its to teach us how to deal with disappointment early on.

According to aunty logic ‘what will people think’ will always triumph. Like when I first started studying journalism, I was volunteering at this brown event where I had to babysit 5-10-year-olds whilst they made Hindu gods out of clay and some Aunties asked me about my life plans.

I told them I study journalism and as soon as the first wave of unnecessary judgement hit me, I quickly added that I was wanted to specialise in scientific journalism.

I think the judgement comes in a hierarchy of unnecessary waves. The worst wave is probably when Indian Aunties act like the most important part of a marriage is making sure your public appearance at the annual Navratri (Hindu festival- involves dancing)  event doesn’t raise any unwanted eyebrows.

Although, I think it’s important to note that you don’t necessarily need a white husband to do that. You could rock up in a MAGA hat smoking a spliff and create a similar effect.

Is it slightly naive to assume there’s a higher chance you’ll get along with someone because both of your grandparents are from Punjab – before the partition – and migrated to England in the early 60s?

That, and your melanin.

Just because they’re an Indian Chemical engineer doesn’t rule out the possibility of them emailing you drake lyrics on why you should be together – because you blocked them on every other social media platform because they were so toxic.

Is it widely assumed that an individuals melanin is enough to guarantee that they’re the match for you. Does it also confirm that they’ll be more emotionally available then a deformed pigeon on acid?

Do we all feel pressured to date people whilst keeping our annual Navratri appearance in mind?